Skip to content
'the life you choose...'
Keeping you safe Read our COVID-19 Policy
Home > News > Our wildlife bloggers return with an update on their caterpillars

Our wildlife bloggers return with an update on their caterpillars

TAPS wildlife team here again, we hope you've had some fun spotting wildlife since our last blog. We have a new member to our team Lucie, she will be watching wildlife with us from now on. Welcome Lucie.

We have been seeing the return of a few of our popular garden birds to our table, including juvenile dunnocks and robins. 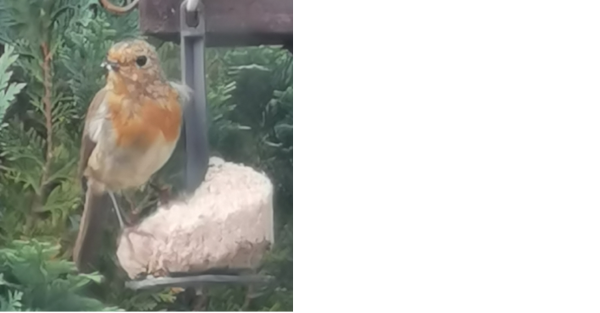 A young robin on the Hub's birdfeeder

A couple of weeks ago heard a new birdsong we didn't recognise, we used the BirdNET app which is excellent in recognising birds from recording a snippet and analysing it. At first we thought it was lying to us as it said it was a spotted flycatcher. These used to be a common sight in Norfolk but have seen a dramatic decline since the 1960s, with the population falling by 79% between 1968-1998, which is a great deal to lose. So, after a few attempts and still receiving the same answer we went in search.

The song was coming from inside the large fir trees and eventually we saw one fly onto the ground. We got a photo but sadly it's not great, there were some youngsters also in the tree which kept well hidden. We spotted them again on the following days and are really happy to think they choose here to breed. We hope they stay safe.

We spent some time having a close look at a goldfinch's nest that had been vacated. Our colleague Vicki brought it in from her garden. It's amazing how these tiny little birds create such intricate little works of art. On close inspection we spotted wool, moss and horsehair perfectly formed for their little brood of eggs.

The goldfinch nest brought in by Vicki

We then walked around the grounds to look for nests and saw some very large crow's nests up in the trees. We looked through binoculars as squirrel's dreys can look very similar but are perfectly round and not open at the top like a bird’s nest.

An update on our caterpillars; we think that some of the chrysalises have now made their transformation into butterflies. You can see the white wings inside the chrysalis in our photo. There are also a few still waiting to become butterflies.

Our chrysalises - waiting to become butterflies

The large and small white butterflies were very happy to make friends with us last week. They enjoyed settling on Helen’s top! 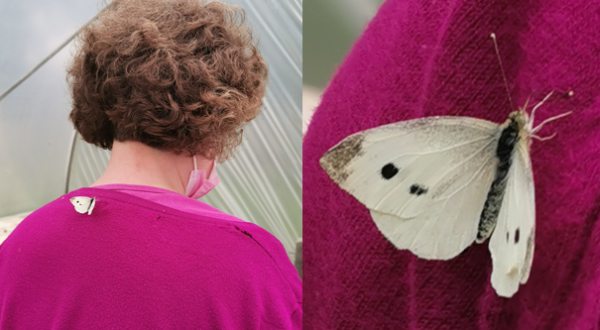 A butterfly making friends with Helen

Now the nights are getting darker and the leaves will soon be beginning to fall from the trees, we may spot more birds and even some of our birds of prey. So, keep watching wildlife and help where you can.