Skip to content
'the life you choose...'
Keeping you safe Read our COVID-19 Policy
Home > News > Our Wildlife Watchers share their sightings and celebrate the arrival of summer

Our TAPS Wildlife Watchers share their love of moths

There's a lot of colour around in the world of wildlife right now with butterflies, moths and dragonflies appearing. We've been lucky enough to spot quite a few butterflies here at the Hub, but some people forget that moths can be very beautiful too!

We've spotted a cinnabar moth, which is brightly coloured black and red. They are native species in Europe which like grassy habitats including waste ground and can be seen during the day. Another small moth we saw was an Albania Geoffrella, a day flying micro moth. It’s mostly seen at sunrise (although we saw it at lunchtime), it likes woodland, hedgerows and marshy places. We recorded both on www.norfolkmoths.co.uk website. 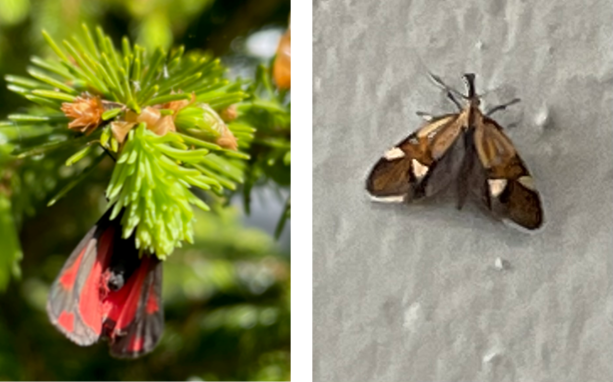 If you like moths, an easy way to spot them is to make a moth trap. It’s not really a trap, it doesn't catch them or hurt them, but attracts them so that you can have a closer look. Hang out a light coloured sheet on your washing line in the dark and shine a torch on it. It will attract moths and hopefully you'll get to identify some too.

There are also a lot of damselflies around, especially the banded demoiselle and the large red, especially in woodland. We will see more dragonflies in the coming months, so keep an eye out for our native dragonfly, the green eyed hawker. Better known as the Norfolk hawker it's generally seen along the Broads. As is the swallowtail butterfly, so if you have a day along the Broads you may spot them. Another great place to see butterflies and well worth a visit is Holt Country Park.

Summer is here, we've seen swallows and swifts flying over and some of us have heard of a cuckoo. Another bird alongside the chiffchaff that sings its own name! We’ve spotted rabbits and a female muntjac deer on our wildlife camera, as well as two hedgehogs which we hope have visited our hedgehog boxes around the Hub. We've also spotted a few fledglings around - we've seen baby blackbirds and dunnocks, blue tits and greenfinches.

We have signed up to the Wildlife Trust’s ‘30 days wild’ which gives us something to do with wildlife each day in June. We were also very excited about the return of Springwatch and have enjoyed watching the live cameras from Wild Ken Hill in Snettisham and seeing what wildlife Chris, Michaela, Lolo and Megan have for us this time.

Sightings from our team include a starling murmuration from Jasmine, Mark saw a roe deer, a hare and a rabbit where he lives, Claire saw a Muscovy duck while out walking her dog which is not a native bird to the UK. Claire Also saw a white throat, black-cap and few grey wagtails.

She also spotted the work of spindle ermine moths, which cover trees in a stretchy web-like covering to protect the caterpillars from predators.

The oyster catchers have returned to the Hub again this year as have the pied wagtails, we also have our very tame blackbird Bert who visits us daily and we believe is father to the babies.

Until next time, keep watching wildlife and help where you can. Enjoy the sights and sounds of summer there's so much to see and hear.